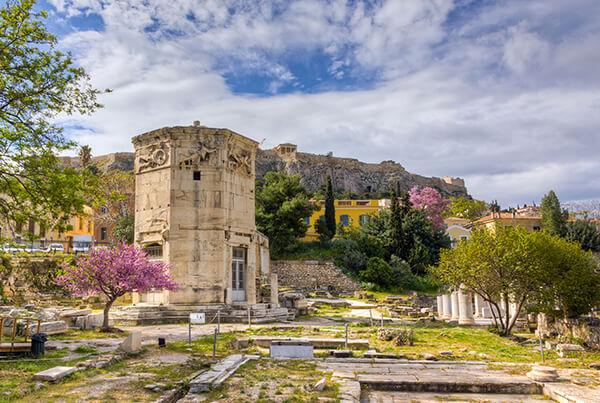 Early Clock Towers and Turret Clocks: The Tower of the Winds in Athens

Clock towers, with their integral turret clocks, are common pieces of public architecture commonly seen in squares or near cathedrals and other public meeting places. They were designed, from their earliest iterations, to give the public the information they needed. Early clock towers gave meteorological information, movement of the sun and moon, astrological information, and various methods of telling the time. Earliest time-telling included sundials and then clepsydra, or water clocks. These water clocks depended on the movement of water from one level to another, taking a standard amount of time. Nearly all of these ingenious early clocks had mechanical moving parts and later, integral bells.

The Tower of the Winds in Athens was built between 50 and 100 BC, we believe by the Macedonian astronomer Andronicus of Cyrrhus. This large, octagonal tower is designed to deconstruct the movement of the winds for the public, as well as viewing time on a sundial. Each face of the tower pointed in a compass direction, with the frieze of that section decorated with carved figures representing the Anemoi, mythological figures who represent the various winds and their directions. Surmounting the tower was a large bronze wind vane in the shape of Triton.

The north wind, Boreas, was a strong and violently tempered wind, considered the bringer of winter. Figures of Boreas usually show a shaggy, bearded old man wearing a cloak and holding a conch shell. Zephyrus, the gentle west wind, heralded the beginning of spring. The figure of Zephyrus was usually depicted holding spring flowers. The faces of the tower are each set with a sundial under the Anemoi figures, and there was a clepsydra internally for timekeeping during the night.

This tower gave residents of Athens not just time information, but weather and information about the seasons. When Rome conquered Greece, the wind information from the clock tower was used as a predictive device as well, as there was a belief that changing winds foretold the future. As other conquering civilisations came to rule in Greece, they co-opted the Tower of the Winds for their use. During the time of the Ottoman Empire, for example, the Dervishes used the tower as a place of contemplation and study.

The turret clocks also changed as new developments allowed clocks that needed less attention. Water clocks required constant attention and upkeep. As new mechanical works were developed, clocks that kept time well without constant human intervention began to be built and put into clock towers. The new mechanical clockworks usually allowed for some interesting or fun timekeeping, such as the passage of figures, animal or human, across the face of the clock tower, or the popular birds or bells calling the hours.

A two year restoration and cleaning of the Tower of the Winds was completed in 2016. Find out more about antique bells restoration.