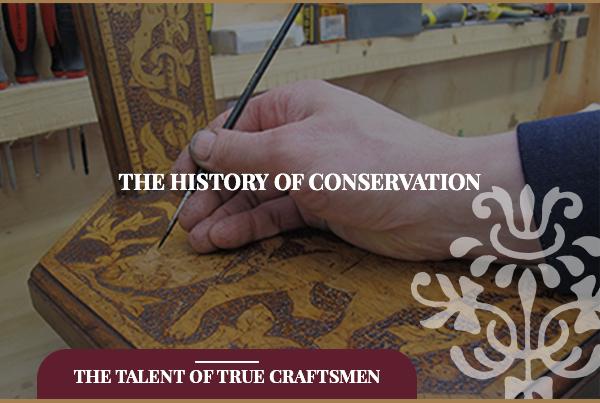 The History Of Conservation

Art conservation is the fine, scientific discipline of conserving artwork, furniture, china and much more. The central aim is to preserve the original piece down to the finest detail. Any improvements to the appearance come second. The process of conservation may include repair, cleaning, re-shaping and so on. To give you a better understanding of the science, here’s a brief history of conservation.

Although we hear about it a lot more these days, conservation is nothing new. In the 1800s and 1900s, there were already a lot of conservators working on Old Masters’ pieces. Johannes Vermeer’s The View of Delft, for example, had been modified around 50 times by 1800. Compared to modern techniques, these early pioneers were using some fairly primeval methods. Older conservation manuals would often prescribe techniques which caused more harm than good to the paintings! For example, it was commonplace for a painting to be treated with wood ash, and wiped off using water. This would leave a strong alkaline residue which would cause a lot of damage to the painting. Although most dismissed these techniques a long time ago, some conservators were still using these harmful techniques in the 20th century.

So, how has conservation changed? A modern conservator will use non-invasive methods to determine which parts of the painting are original. They’ll also try to figure out how previous conservators have treated the piece throughout the years. Typically, the analysis starts off with a series of x-rays. This will show the conservator how the painting was originally composed. It reveals a definite outline of the art, based on the different absorptions of paints. For example, with more absorptive paints, like lead-based white, will show up more clearly on the x-ray. Even paint that appears translucent becomes more absorbent with more added layers. Next, infrared imaging is used to see the original pencil work, and more losses of paint. Modern conservators can use fixed-wavelength cameras, allowing them to see carbon-based drawings at 1700 nanometres.

These techniques are used as a foundation to a longer process of erasing harmful work from past conservators. In times past, tiny portions of the paint would be removed, in order to see layers of varnish and pigments that had been used. This technique is more or less extinct in 2016, for a couple of reasons. First of all, it removes portions of the painting, and grinds down the authenticity of the original. The illumination of the piece would also be vastly inferior compared to modern scanning techniques. Over time, these sophisticated techniques have completely changed the standards of fine art conservation. In the early days of science, art conservation would inevitably cause some damage to the original piece. Now, we’re able to restore priceless artworks to their original conditions more delicately than ever before.

As we move into the future, more ancient masterpieces are being conserved using the latest technology and knowledge. As with any science, conservation won’t remain static. As I write, more and more techniques are being experimented with and brought gradually into the world of conservation.