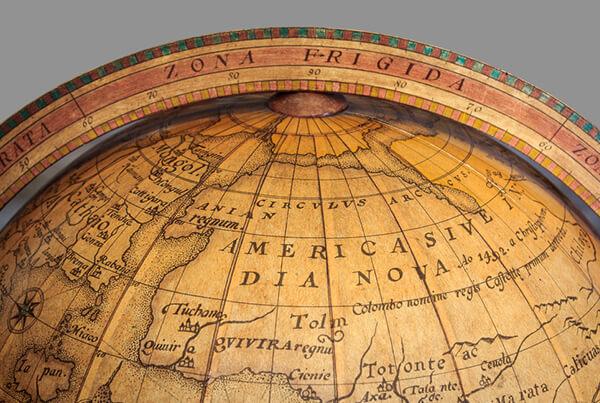 Restoration of Antique and Vintage Globes

The earliest maps were navigation tools, designed to help sailors and travellers navigate trade routes, or they were celestial maps, part of a vibrant and dangerous intellectual-religious debate over the movement of the earth around the sun. Both earth-based and celestial maps were originally drawn and painted on large pieces of parchment, papyrus, or paper, and rolled into scrolls for use. One of the earliest maps of the Roman roads in Europe, the Tabula Peutingeriana, now in the Austrian National Library in Vienna, was drawn on a piece of parchment twenty-two feet long. With the rise in fine bookbinding, centres of printing, binding, and cartography began to grow in Venice and Antwerp, and in these centres, the folio style of atlas was developed.

A folio style book of maps, or an atlas, was much more convenient to use and carry than large rolled maps. During this golden age of cartography and fine printing, astronomers began to develop a clearer understanding of the shape of the earth and the relationship of the sun and stars. With this work came great conflict and challenges, but eventually learning began to win out, and maps began to show the shape of the earth as we know it today.

But how to translate a three dimensional shape (the world) into a two dimensional surface (a map), in such a way that sailors engaged in sailing around the globe can find their way? With various types of navigational lines developed, such as longitude and latitude, Mercator developed a system of navigation that allowed sailors to sail around a globe, while using straight lines on a flat navigational map. This allowed ship captains to put their atlas and navigational charts in their pockets, but the rest of the world, unschooled in what Mercator was thinking (as some of us are still today), needed a different way of understanding what the Age of Exploration brought to the world. So two dimensional maps were translated into three dimensional models of the world.

The early globes were wooden spheres, covered with layers of plaster or plaster and linen, much like a plaster cast on a broken bone. The map itself was often drawn and printed on finest cotton or linen papers, or parchment, in gores- shaped pieces with the upper and lower sections narrowing at the poles. The printed or painted gores, sections of map shaped to fit around the circular globe body, were cut, glued, and shaped to their correct position by hand. The surface was then finished with painting and filling in any areas between the gores with glue and paint; additional varnishes were applied to protect the surfaces.

Globes have been made across the world, in many languages and showing maps of many times. The earliest globes were made using maps with an understanding of the cartography of the day, which has changed with exploration. Political globes, of course, have been redrawn many times, and globes of other celestial bodies, such as the moon and Mars, have been made.

Restoration of an antique or vintage globe begins with an assessment of the goals for the owner. Previous attempts at restoration can sometimes leave marks that may or may not be desirable to leave. If small areas of the map covering of the previous globe have been damaged, some repairs of the section can be made by repainting or drawing that section of the map on similar paper, removing the damaged section, and inserting the new. Globes made of newer materials, such as pressed aluminium printed with a map, have other ways of being repaired.

If there is little knowledge about the history of a globe, its age or how it was made, several assessments can be made by experts in paper restoration to determine the core materials. Weight and feel can tell a great deal about the usual core materials. Many of the most famous globe makers were London-based companies, so examining the globe for identifying marks will allow the craftsmen to identify the maker, and thus know the care materials and methods. Specialist cartographers in antique maps and globes can also identify globes based on the unusual maps that cover them. Many of the most famous navigational charts, for example, had errors in measurement or understanding that were repeated in maps for hundreds of years. Some of these maps, with their period-specific errors, can be used to date globes.

Do you have an antique or vintage globe or map that needs careful repair or restoration? We would be pleased to help. Please contact us for more information, or to make an appointment.

Find out more about our antique restoration.