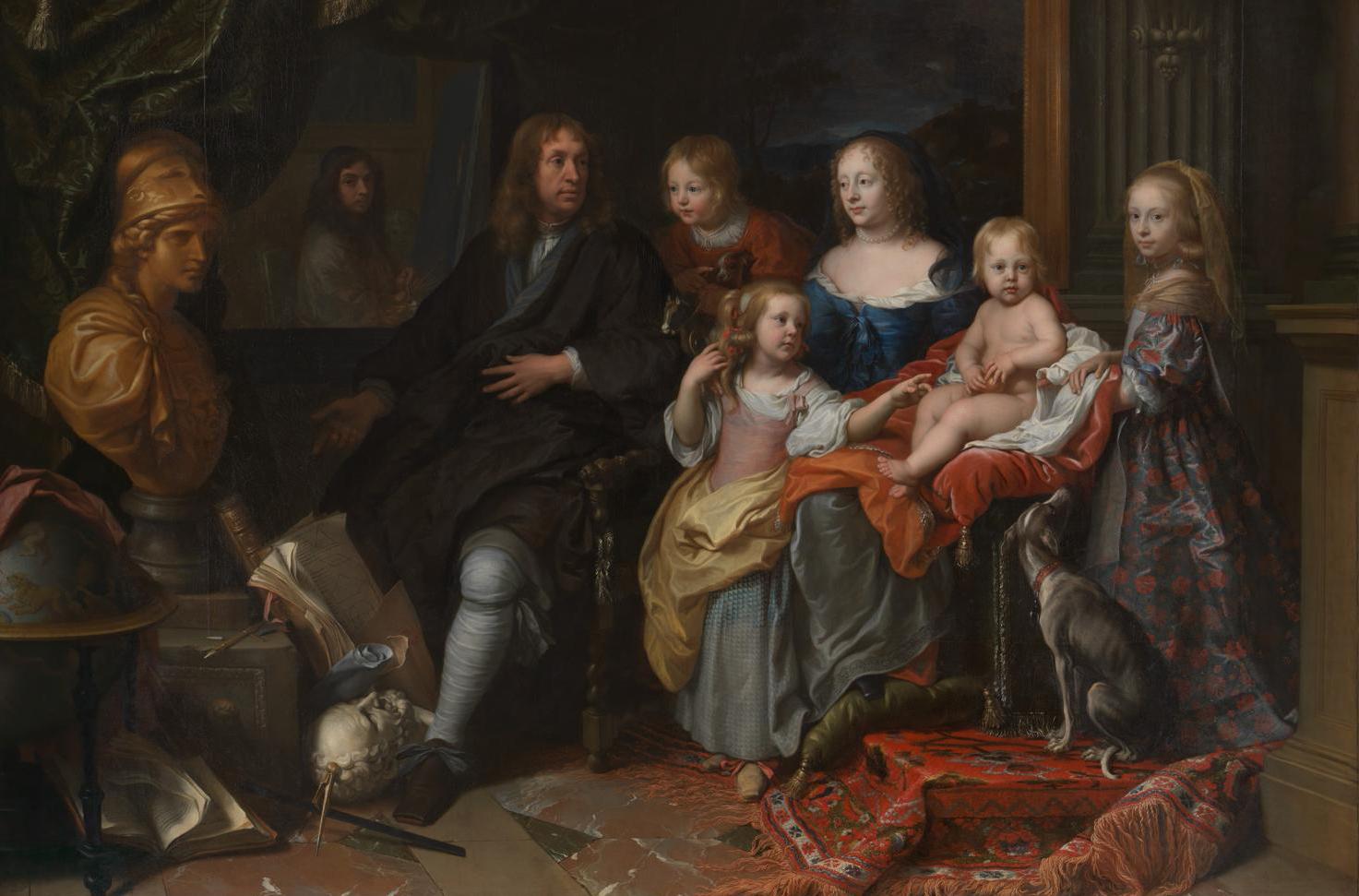 Rediscovering a Masterpiece: Everhard Jabach and His Family (1618-1695)

Charles Le Brun’s grand painting of Everhard Jabach IV and his family has come to be known as one of the most important and celebrated group portraits of the 17th century. Today, it is one of the signature pieces of the collection of the Metropolitan Museum of Art and is displayed in its New York galleries, where it attracts crowds of visitors each year.

But few who marvel at the beauty and excellent condition of this remarkable oil on canvas today will know of the restoration journey it has been on thanks to the Met’s conservation experts. Over 10 months, conservator Michael Gallagher and his team carefully and meticulously worked to bring a dull and damaged masterpiece back to its best so that it can be enjoyed by future generations.

In this blog, we find out how the painting came to the Met and take a behind-the-scenes look at its restoration journey.

A REMARKABLE PAINTING
At the time the Everhard Jabach was commissioned, Le Brun – favourite of King Louis XIV – was on the cusp of becoming the most powerful artistic presence in France.

German-born banker and merchant Jabach was among the great art collectors of his era. Le Brun’s large-scale portrait of him and his family was rare for its time, as it was commissioned for no state or hereditary reason. The artist portrays his subjects at home with their pets, engaging naturally with one another. They are surrounded by books, drawings, ancient busts and a celestial globe which tell of their wealth, culture and intellect, but Le Brun delicately balances this depiction of material wealth and opulence by paying impressive attention to detail in depicting the character of his individual subjects. His own presence in the painting with brush and palette in hand, reflected in the mirror behind the family, tells of his close relationship with them and may explain the remarkable likeness he is able to capture in the painting.

A SERIES OF FORTUNATE EVENTS
How the Everhard Jabach came to the Met is an interesting story. There were many fortunate turns of event that led to the museum’s purchase of the painting.

The Met’s Head of European Paintings, Keith Christiansen, tells how he was in London with his wife, returning to his hotel after dinner one night, when he received an email from a colleague at a major auction house asking him to get in touch the next time he was in London. The email rather intriguingly referred to having “something important to show you”. A hurried visit to the auction house’s warehouse the next morning before his flight back to New York revealed the Le Brun portrait.

The painting had been in the UK since 1794 so, to Christiansen, it seemed a long shot that the Met would ever be granted an export licence, let alone that the price would be right for the museum to acquire such an important painting. But a series of fortunate events ensued. Firstly, the National Gallery in London had other priorities, its sights set on a painting by George Bellows (Men of the Docks) that was also up for sale. Thanks to the support of a regular donor, the Met was able to make an offer for the painting that was accepted. Secondly, a self-portrait by Anthony van Dyck came up for review by the UK Arts Council around the same time they were due to consider whether to grant an export licence for the Le Brun. It is Christiansen’s view that the press attention and subsequent campaign to “save the Van Dyck for the nation” deflected attention from the Le Brun and led to the granting of an export licence in May 2014, 15 months after he had first laid eyes on the painting.

REVIVING A MASTERPIECE: 10 MONTHS OF RESTORATION
Bringing the Everhard Jabach portrait back to its best was a labour of love for the Met’s conservation experts. Commenting afterwards, conservator Michael Gallagher said: “When the painting came into the studio, I was aware it was going to be time-consuming […] The cleaning – relatively speaking – was straightforward, but the structural work wasn’t. I didn’t really know how the journey was going to progress in terms of the challenges of conservation, the solutions and the compromises.”

Cleaning
Gallagher’s team began by removing the painting’s 100-year-old, thick, strongly-discoloured varnish layer, a process he describes as “really satisfying”. Once the varnish had swelled it lifted cleanly away from the paint surface, ready for the next phase of work to begin.

Structural repairs
When the painting was clean, Gallagher’s team turned its attention to its structural issues. At the beginning of the 20th century it had been turned over a smaller stretcher, causing a break in the paint film. When it was turned back in 2012, the resorting distortion caused a divide in the picture which needed to be repaired.

The restoration team began by laying the painting down, taking it off the stretcher, and removing the strip lining and excess wax. They then carefully applied moisture, pressure and heat to sections of the painting in turn – leaving each treatment overnight and repeating again in the morning where necessary – to gradually take out the distortion and bring the whole canvas support back into plain.

Once the structural issues had been addressed, the painting was rolled up on a tube and turned over to enable Gallagher’s team to work on it from the front. A new strip lining was attached and the painting restretched.

Commenting after the structural phase of works, Gallagher said: “On the whole, I’m very, very happy with it […] when you see it now you see the sweep of the composition. Your eye isn’t interrupted by that unfortunate severe distortion at the top of the canvas where it had been turned back…”

Inpainting
The next job for the restoration team was to apply a saturating varnish in order to bring out the tones and colours of the painting. Following this, some light retouching was applied along the line of the previous break in the paint film, as well as to some small scratches and other minor losses, with Gallagher describing the process as “time-consuming but minor”. “Essentially the picture is in wonderful condition,” he said.

Final stages
Finally, the restorers applied a thin layer of spray varnish, a process Gallagher describes as “always a bit nerve-wracking” due to its big, mechanical nature. As well as enhancing the painting’s overall appearance, the extra saturation provided by this final phase augments the impact of the spatial relationships within Le Brun’s piece. The painting was then framed and ready to be hung on the walls of the Met’s galleries.

A HAPPY ENDING
Commenting on the final result, Gallagher said: “[I] think back to what was always a very impressive painting, but was affected very badly by its varnish and by the previous structural issues it had. To now see it join the collection in its full glory is truly marvellous. It is exciting to think that this painting will now have an audience and it’s its first time on public display for centuries.”

Everhard Jabach and his family (1618-1695) is currently on display at the Metropolitan Museum of Art in New York www.metmuseum.org.