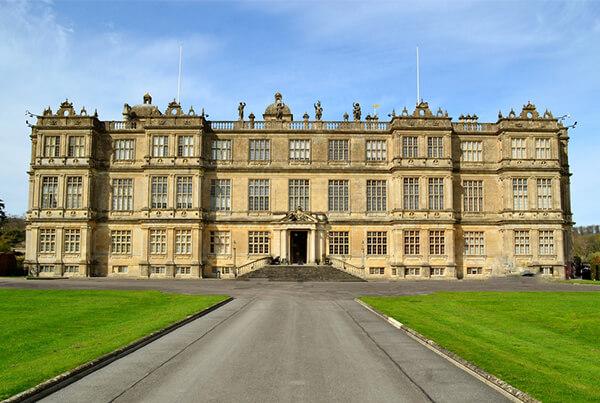 The History of Longleat House

As English stately homes go, Longleat House in Wiltshire is about the most remarkable you could hope to find. At various points in its history it has enjoyed great prosperity or been rescued from near-oblivion; it has played host to queens and princes as well as hundreds of exotic wild animals; and its interior and exterior design and vast grounds have been shaped and re-shaped countless times by the collection of characters that have called it home over more than 450 years of history.

The house was the first home built specifically to impress the then monarch Queen Elizabeth I, the first stately home to open its doors to the public and is the site of the first drive-through safari park worldwide outside of Africa. Besides all this, it also boasts lavish interiors and impressive collections of books, fine art and other collectables.

In this blog we discover the history of Longleat House from its mid-16th century origins to today and explore some of the facts and figures that contribute to its status today as one of the finest stately homes in England.

Longleat House was built by Sir John Thynn between 1568 and 1580 and has remained in the family ever since. Sir John was a kitchen clerk to a member of the royal court who very quickly become steward to the Duke of Somerset, the future Lord Protector of the Realm who would rule the nation on behalf of nine-year-old Edward VI after the death of his father Henry VIII. Sir John purchased the land on which the house was built in 1540 for £53 (the equivalent of more than £300,000 today), which at that time was 60 acres containing the original house, an orchard and a rabbit warren. The original house was destroyed by a fire in April 1567.

Building Longleat was to be the start of the ambitious and business-savvy Sir John Thynn’s property empire and coincided with his meteoric rise to status. Built to show off his wealth and status, it was one of the first so-called prodigy houses to be constructed, and remains one of the finest. The house was built with the help of several architects, but it is believed that Sir John was heavily involved in its design, as he was determined to create a truly remarkable home, one that would impress Queen Elizabeth I enough to entice her to visit, cementing Sir John’s position in society. In building Longleat, Sir John was determined to create a legacy that would last forever.

With so much at stake, it is perhaps not surprising that Sir John was very exacting in his demands. Labourers and craftsmen were directed to work with “haste” but – if any fault was found – they were to “make it again”. During construction, Sir John purchased an entire quarry of Bath stone at nearby Hazelbury and, when he had cleared out that one, he simply bought another. If what he wanted wasn’t available in England, he was happy to shop further afield. And he wasn’t shy about haggling over prices either, with the stone mason noting in a letter written at the time: “We think that in all England there is none that has received less profit and lesser thanks than we.”

With all this time, money and effort being put in to ensure the finished house was absolutely perfect, one could be forgiven for assuming that Sir John would have been delighted when Queen Elizabeth I announced that she was going to come and stay. However, hosting the Queen was incredibly expensive, thanks in no small part to the number of people that she brought with her. Sir John tried to dissuade the Queen from visiting Longleat, telling her first that the house wasn’t ready, and then that the entire household had been struck with a sweating sickness.

But in the end she did visit and he pulled out all the stops, presenting her with a necklace that cost £140 – the equivalent of nearly £465,000 today, and three times as much as he had spent on buying the land at Longleat in the first place. It worked – the Queen was very impressed with what she saw at Longleat.

MODIFICATIONS TO THE HOUSE AND GROUNDS

Following Sir John Thynn’s death in 1580, Longleat passed into many different hands, some of which were safer than others but all of whom made their mark on the house in some way. It has been said that if Sir John were to return to visit the house today, the Great Hall is likely to be the only room he would recognise as retaining its original design and character. Although the outside of the house remains largely original, the interior design and décor has been changed and re-shaped over the years by successive owners.

Over the centuries, celebrated designers including Jeffry Wyatville and John Crace were employed to work their magic on the interiors of the house, introducing corridors for added privacy, grand staircases and ornately painted ceilings. Vast acres of formal gardens with miles of pathways, fountains, canals and a maze were introduced at huge cost (£30,000 – equivalent to £63 million today) before, just 70 years later, the whole lot was ripped out and thousands of new trees planted to create Capability Brown’s trademark natural landscape, at a further cost of £6,000 (£11 million today).

There have been times of prosperity, and times when the financial position of the estate was precarious. Some custodians were great spenders, while others possessed great business acumen and talent for finances.

OPENING TO THE PUBLIC

One such custodian with a head for business was the 6th Marquess, Henry Frederick Thynne. When Henry inherited Longleat in 1946, he also inherited debts of £700,000, the equivalent of £69 million today. The estate’s income was limited. Since the turn of the century less than 50 years earlier, around 1,200 similar country houses had been demolished as their owners could no longer afford to keep them.

In order to save his family’s home, Henry boldly decided that Longleat should be the first private home to open its doors to the public. His decision caused a huge furore at the time – his peers were horrified – but proved to be the right decision. In its first year of opening to the public in 1947, Longleat took more than £16,000 (equivalent to £1.5 million today) in admissions. During the next 15 years, 600 other private homes would also open their doors to the public.

THE FIRST SAFARI PARK OUTSIDE AFRICA

The 6th Marquess was also responsible for the controversial decision in 1966 to open a safari park on the Longleat estate. The park was the first outside Africa, and made headlines around the world. It was even debated in the House of Commons. When it opened, traffic queued for four miles around the estate as eager visitors clamoured to get a glimpse of the park’s 50 lions (then the only species on offer).

In order to create the park, the Marquess instructed contractors to build new roads and fencing that together cost more than £37,000 (£1.2 million today).

Today, around 500 animals spanning more than 130 species roam the 9,000 acres surrounding Longleat house, and the safari park has become the estate’s main source of income. Visitors can rent cottages on the estate that allow them to stay at the front and centre of the safari action.

Today, Longleat House continues to draw in the visitors. The estate is owned by the 7th Marquess of Bath, Alexander Thynn, while the house, grounds and safari park are run by his son Ceawlin and Ceawlin’s wife, Lady Emma.

The 7th Marquess has made his own mark on Longleat, painting the majority of the rooms in the private wings with his own blend of oil paint and sawdust to create a unique three-dimensional stucco effect, and designing several mazes which now occupy the grounds.

The house is full of antiques and important artefacts from history, including the waistcoat worn by King Charles I at his execution in 1649, which is on display in the Great Hall. The house has one of the largest private collections of books in Europe, with more than 40,000 across its seven libraries.

The ceilings of the house are adorned with ornate paintings and, in the Great Hall, are two moving portraits. The paintings show the 2nd Viscount Weymouth, Thomas Thynne, and his wife Louisa Carteret arguing about the mysterious death of her manservant. The story goes that the 2nd Viscount was jealous of the handsome manservant, who was a favourite of his beautiful wife, and believed rumours that the pair were having an affair. He had the manservant thrown down the stairs, breaking his neck and killing him, but didn’t tell his wife. To this day – it is said – her ghostly vision roams the passages of the house looking for her lover.